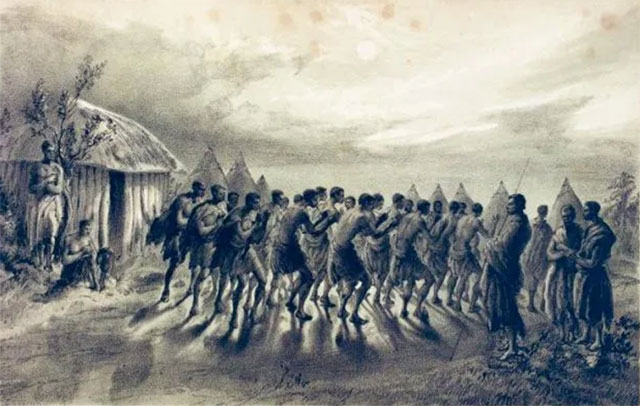 It was over 3000 million years ago that the rocks over which the Braamfontein Spruit waterfall flows in Craighall were formed.

We may not know much about what happened in the intervening millions of years but we do know that the Tswana people migrated to the Highveld around 600 years ago.

The Highveld in those days was covered in sweeping grasslands – hardly a tree in sight (difficult to imagine Joburg today without all its trees!). The pastoral Tswana people lived here, grazing their cattle and planting their traditional crops of millet and sorghum. There was plenty of water and it is probable that the Tswana would have had settlements along the Braamfontein Spruit.

Their idyllic existence was interrupted by a dramatic change in climatic conditions at the end of the 1500s, leading to a mass migration to the Lowveld. It was to be another 150 years before the Tswana returned to the Highveld. Once again the people prospered and resumed their farming activities. They now also grew maize, to which they had been introduced by the Portuguese sailors who visited Maputo.

A further change occurred when iron ore deposits were discovered in Melville Koppies. Being able to mine, smelt and work iron ore into metal objects such as spear heads, meant the local people were able to barter produce and animals for iron axes, spears and arrow heads. Once again, though, their tranquil life was threatened, possibly by drought or a shortage of arable land. Whatever the reason, in 1800 the Tswana once again left the Highveld, this time migrating to Botswana.

The first European settlers in the area that now constitutes Randburg were Boers, who come to the area as a result of the Great Trek. J.L. Pretorius farmed an area which extended from present day Bryanston to present day Braamfontein, and named this farm Driefontein. In 1886, when Pretorius died, the farm was subdivided amongst his nine sons, many of whom sold their farms to outsiders. William Grey Rattray*, founder of the townships of Craighall and Craighall Park, purchased one of the farms (Klipfontein) for the princely sum of £3 000 in 1891 – only six years after the establishment of Johannesburg.

Rattray renamed the area Craighall, Craighall Park and Blairgowrie, after his birthplace in Blairgowrie, Scotland. In those days there were scattered farms and small holdings in these suburbs, most of which supplied Johannesburg with its fresh produce.

Rattray also farmed, but in addition he dammed the Braamfontein Spruit to make the Craighall Lake.

Mr Sam Kruger, who owned a tannery and boot factory and then later the Craighall Park Hotel (where the Colony Centre is today), and gave his name to Kruger Drive.

In 1902 Rattray made available 229 acre-plots for sale by 99-year leasehold in Craighall. 300 plots (of the 600 surveyed) in Craighall Park were put up for freehold sale in 1911. With his Scottish background, he named Craighall’s streets after famous Scottish families, hence Talbrager, Douglas and so on. The streets of Craighall Park were named after English dukes, such as Somerset, Buckingham and Lancaster.

Sales of these plots were initially slow, as the suburbs were seen to be too far out of town to be fully viable: perhaps the gushing advert cited above was intended to drive up sales! The plots, though, offered good value. The price of £30 included free transfer and “no municipal rates and taxes to pay.”

This happy state of affairs came to an end, however, when Craighall Park came under the jurisdiction of the Craighall Health Committee after Johannesburg was established as a city in 1928. The suburbs were incorporated into the municipal area of Johannesburg in 1938, although improvements such as the tarring of roads and installation of street lights only occurred after the Second World War.

* William was the great great grandfather of the late David Rattray of The Zulu War
battlefields fame.

In 1902 Rattray developed some of his property into the residential township of Craighall and the rest he developed into a series of large lakes, which offered fishing, bathing and boating.

There was a hotel, pagoda, beer and tea garden, sports fields and other entertainment areas. (For more information about that era, click here.) Other parts of the property, including what is now Delta Park, were cultivated fields and grazing for dairy cows.

As gold mining increased, so did the demand for timber poles. A legacy of those early farming days are the numbers of large gums trees dotted around Craighall and Craighall Park. many of them are well over 100 years old. and by rights should be protected unless they threaten safety and property.

The first stands for sale in Craighall Park were offered in 1911. It was to be many years, however, before these peri-urban areas were incorporated into the Johannesburg city area. Of note, though, that today’s present Craighall Primary School was established in 1918.

By the late 1920s Johannesburg was bursting at the seams. New townships were rapidly being developed as industries grew apace and in 1928 it was proclaimed a city. By 1931 (incidentally the year in which the first double-decker buses came into service), Johannesburg’s total population was nearing 600 000 and it kept on growing. Craighall and Craighall Park now started coming into their own.

Jan Smuts Avenue was an important route between Johannesburg and Pretoria during the Anglo-Boer War of 1899-1902. The ox wagon trail went along the Old Pretoria Road and the ox carts generally outspanned in the area now ringed by Burnside Avenue in Craighall. Normally a fresh set of oxen was acquired for the last part of the journey into the town of Johannesburg because of the steep hills. The route lay along today’s Buckingham Avenue leading into what became Jan Smuts Avenue: when the wagons passed the site of today’s Johannesburg Zoo, there was relief because the rest of the journey was downhill. 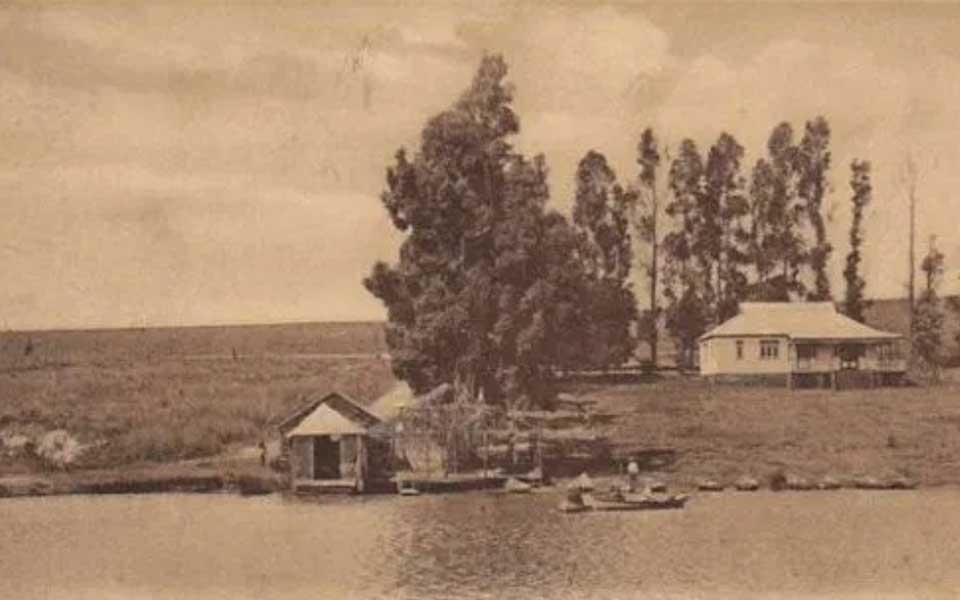 This is the reason, it is said, that Buckingham Avenue is the only curved road in our area as it originally followed the gradients of the hill. Perhaps this is among the reasons that Craighall Park’s roads don’t follow the traditional grid pattern. 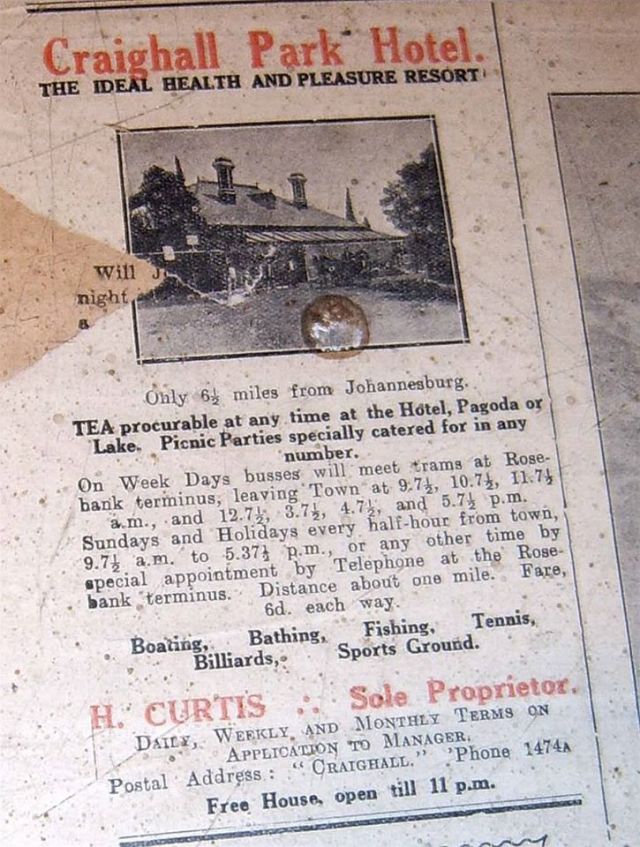 In 1902 when plots were offered for sale, Craighall was described as offering unrivalled scenery with some of the plots to edge an artificial lake which was to cover some 20 acres!

Rattray created a series of three weirs on the estate and today the remaining walls offer a fine example of dressed stone masonry. The first weir was built in 1905 and was known as the Braamfontein lake which became part of the recreational area of the Craighall Park Hotel. The lake was stocked with trout to offer fly-fishing to the wealthy visitors who frequented the resort. The other weirs provided irrigation for the market gardens of the estate.