Robyn Shamu handles this portfolio and in addition to the Spruit / Delta area, she’s been working with neighbouring residents’ associations to improve the islands on Jan Smuts and at the intersection of the Nicol highway and Jan Smuts Avenue. Robyn is assisted in her work by the Hugh Wyndham Park user group.

Our immediate vicinity includes a variety of easily accessible amenities. Within a one to three kilometre radius, you can do yoga or karate at the Craighall Sports Club, donate blood, have riding lessons, cycle or walk along the Braamfontein Spruit, enjoy great coffee, or have your hair and nails done. We also have the Colony, Dunkeld West, Lancaster Village and Valley shopping centres within our suburbs and Hyde Park Corner is a stone’s throw away. Hirsch’s Homestore recently opened a branch on our doorstep, with appliances of all sizes.

The ridges known as the Witwatersrand form one of the main watersheds in the Rep of SA. The name means ridge of white waters, for the early travellers found 14 streams rising from these rocky ridges. These streams feed into 2 major river systems, namely the Limpopo and Orange Rivers.

The Braamfontein Spruit rises in Hillbrow, as a spring. The Spruit flows northwards and is joined by the Montgomery and Westdene Spruits below Emmarentia Dam. It continues on its way through Victory Park, Parkhurst, Craighall Park, Craighall, Glenadrienne and Bryanston joining the Klein Jukskei in Sunninghill. Together they join the Jukskei at Leeukop and continue to the Crocodile River which flows into Hartebeestpoort Dam. 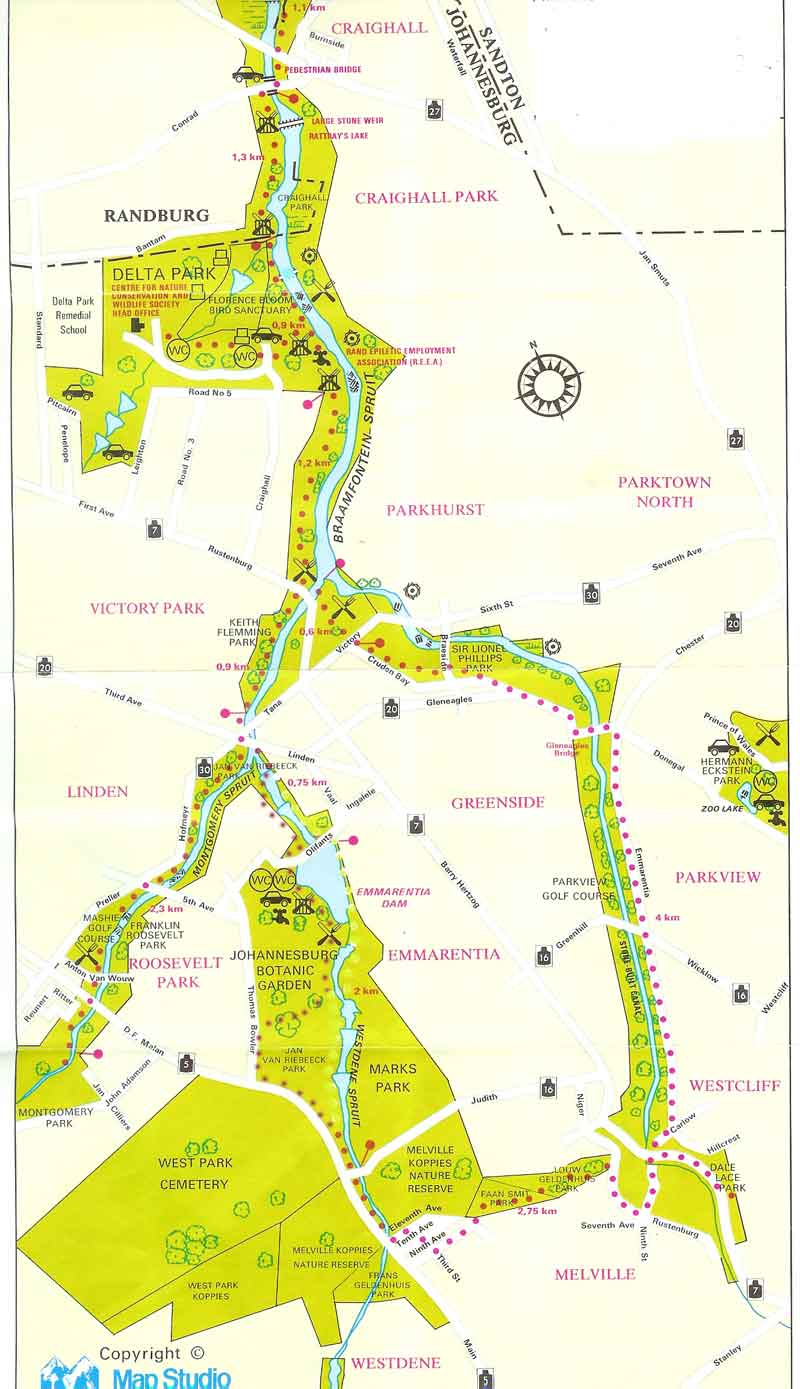 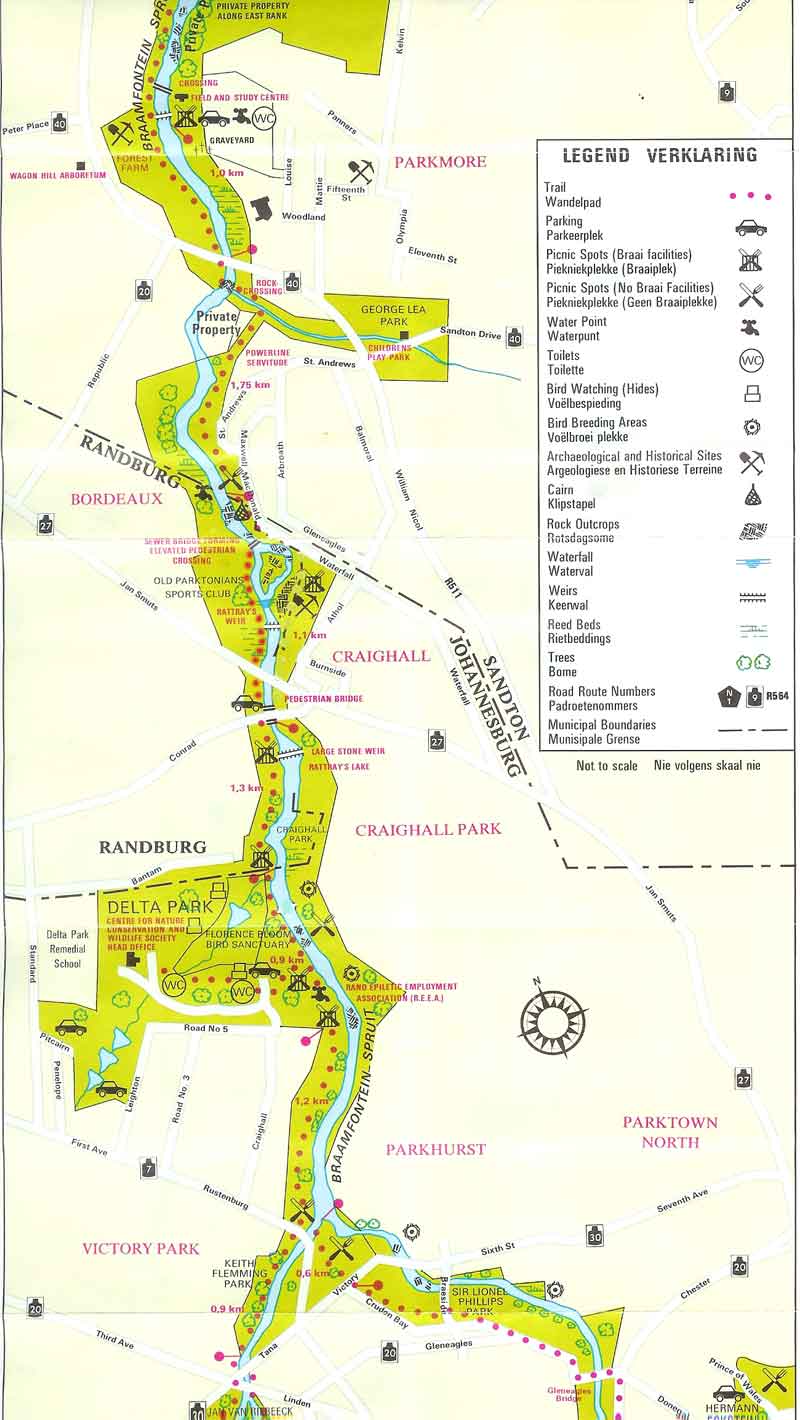 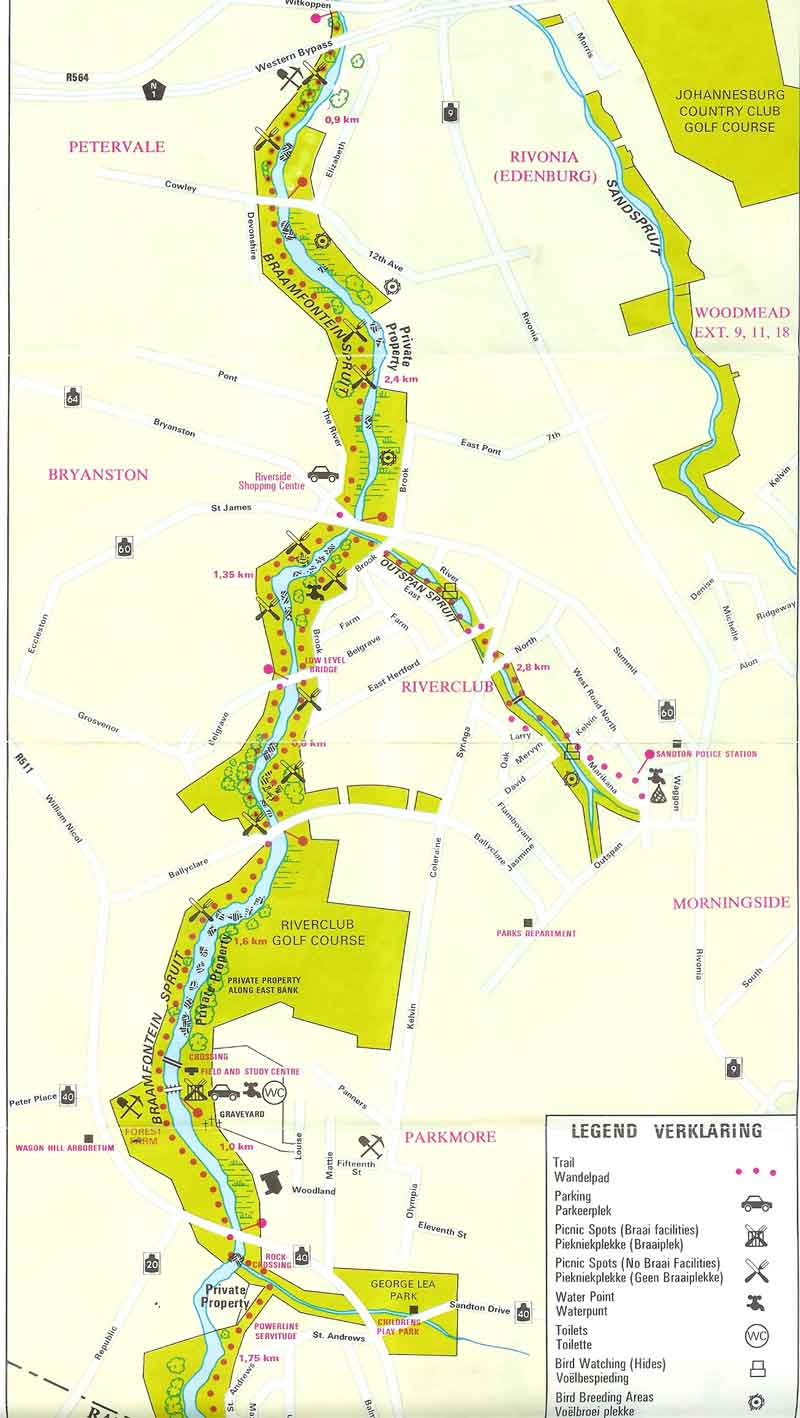 This was originally one of 4 sewage farms developed in the 1930s. When the Sewage works were closed in 1963 the buildings lay unused for 10 years when they were developed into an Environmental Centre thanks to the forethought of benefactors such as the Bloom family.

The Delta is the largest of the parks in Joburg and is 104 hectares in extent. The park is a bird lovers paradise with over 200 species being recorded here.

There are fascinating tales about this area. In 1891 the farm Klipfontein was bought by William Gray Rattray and renamed Craighall after his birthplace in Blairgowrie, Scotland. His estate comprised the suburbs now known as Craighall, Craighall Park and Blairgowrie.

In 1902 when plots were offered for sale, Craighall was described as offering unrivalled scenery with some of the plots to edge an artificial lake which was to cover some 20 acres! Craighall Park is rumoured to have boasted itself as being a new suburb that charged no service rates. You can imagine how people flocked to buy!

Rattray created a series of three weirs on the estate and today the remaining walls offer a fine example of dressed stone masonry. The first weir was built in 1905 and was known as the Braamfontein lake which became part of the recreational area of the Craig hall Park Hotel. The lake was stocked with trout to offer fly-fishing to the wealthy visitors who frequented the resort. The other weirs provided irrigation for the market gardens of the estate.

The Rand Epileptic Employment Association is situated on the eastern bank of the Spruit. This was opened in 1941. Today REEA grows organic veggies which can be purchased by the public and assists with funds for the care of the residents. 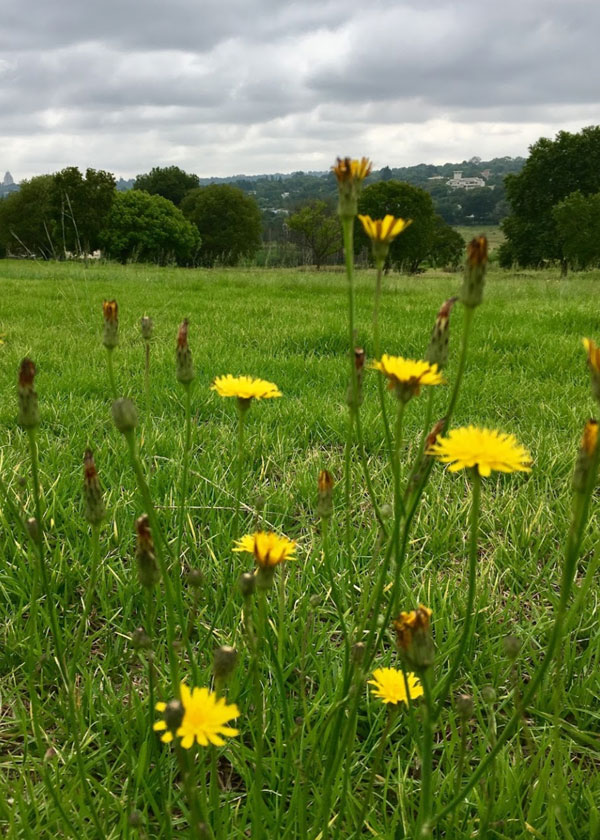 Our area is particularly rich in bird life, in spite of the fact that parts of the Spruit have become degraded. Additional information will also be found at www.deltaenviro.org.za/ or www.footprint.co.za/Braamfontein.htm (has some very attractive photos of the spruit, including the Craighall waterfall and Rattray’s Weir).

We hope that the amateur ornithologists among us will also encourage residents to take a proactive interest in enhancing the river area. Have a look at the bird list submitted by a Craighall resident and see what you can add to it.

Residents have asked about indigenous trees that are evergreen, fast growing and attract birds.

Highly recommended in this category is Kiggelaria africana.It is very attractive and fast growing, especially if given plenty of water. The most fascinating thing about this tree is that it attracts swarms of orange butterflies that lay their eggs on the leaves. These hatch in spring, and the Diedrick cuckoos, which live on caterpillars, arrive in their hordes and generally stay until the end of summer. Incidentally, the caterpillars do not do any damage to other plants as they seem to be specific to Kiggelaria. For best results, plant 2 or 3 specimens. Male and female flowers occur on different trees; recommended planting is 1 male and 2 females. The latter produce very pretty fruits that attract Cape Turtle Doves and Red-eyed Doves when ripe.

Are you harbouring these aliens?

Invasive plants compete with indigenous plants and acceptable exotics for space, sunlight, water and nutrients. They seed aggressively and spread quickly. You may not be aware you have them.

Category 1 plants and trees must be removed and destroyed immediately.

Category 2 plants and trees may only be grown under controlled conditions.

Category 3 trees may not be planted at all.