At the end of last year two CRA members were walking along the Spruit at Delta Park. They saw a man with a home-made poop-scoop, hard at work around the local landmark known as the Blue Bridge which crosses the Braamfontein stream and is one of the main access points to Delta Park. Interested, they asked who was employing him. Gentle and mild-mannered, Sifiso “Moses” Sithole explained that he is homeless and walks through daily to collect food from a soup kitchen in Blairgowrie. On his way he had seen that there was loads of dog poop. And so, he was doing something about it.

The CRA arranged with uKheshe to get him an uKheshe vest and they provided him with a cell phone. uKheshe runs a programme whereby people can donate money using the code on the vest which can then be accessed by the individual using a phone. Unfortunately his phone was stolen at the beginning of March and with lockdown we have been unable to re-establish our connection with uKeshe. Hopefully we will be able to do so soon.

“Moses”, as he is known in the area, was born in Alexandra, is 32 and lost his job as an office administrator in early 2019. He is still picking up dog poop and now also sells poo bags as advertised by a concerned citizen. This is a great example of community involvement and how this impressive man with so little at his disposal, has been proactive in ‘making a difference’ despite his dire circumstances.

So, when taking your dog for a walk, maybe take some money to buy poo bags in case you meet up with Moses. He is certainly giving back and deserves more than just recognition and a thank you. 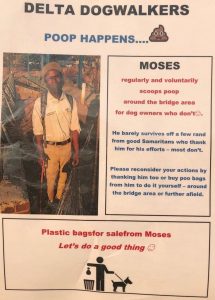